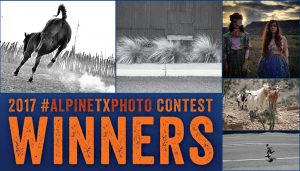 The City of Alpine is pleased to announce the Winners of the 2017 #AlpineTXPhoto Contest! Click here to view them, the finalists and all of the entries to the 2017 Contest.

Free and open to the public, this annual contest is an opportunity for our visitors from near or far as well as local community members to showcase their photographs and videos.

Entrants have the chance to win one of the following cash prizes.

Any questions can be directed to photos@visitalpinetx.com

This year’s photo contest will be judged by Terry Cockerham, a Dallas-based photographer whose current exhibit, “Big Bend and the Terlingua Project”, is on display at Alpine’s Museum of the Big Bend through September 3. Cockerham’s work can also be viewed at his web site, www.terrycockerhamphotography.com. 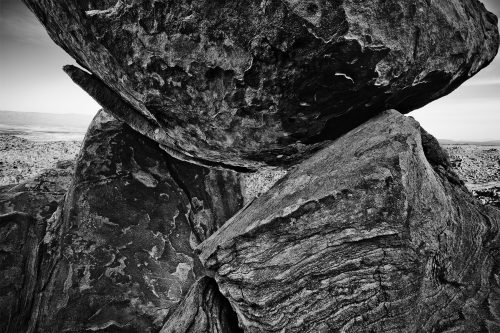 After judging the 2017 Contest, Cockerham had the following words of encouragement for the participating photographers:

“I saw such an incredible body of work for the Alpine Photography Contest that selecting only five images to be the winners was even more difficult than I could imagine. I spent many hours revisiting all of the images multiple times before I selected the five I have chosen. For those of you that have been shooting for a while but did not get selected in the top five, please don’t quit entering your images to various juried shows. I’ve been entering juried shows for years and I can tell you that I have not been selected for shows much more often than I have been selected for shows. Finally for those of you that just bought a camera and are still learning how to use it, don’t get frustrated and don’t quit entering juried shows. Like any other art form, it takes time and patience.

“And then there’s the juror. Something every person that enters a juried show needs to consider is that every juror brings along his or her concept of what a good image is. They may have a preference for color images vs black and white, don’t like photos of pets, sunsets, etc. A good example is my most recent entries to two different juried shows, one in Lubbock and one here in Irving. I sent two images, some of my Bryce Canyon work, to the two different juried shows (they both received the same images). In one case the two images were selected (Lubbock) and in the other case neither image was accepted (Irving).

“For those of you that are just getting started in photography and you find yourself just a bit frustrated with your results, below are some things you can do to make your photos better right away.”

Photographs must be taken in the City of Alpine and its immediate surroundings. Photos within the City are preferred. “Immediate surroundings” includes the roads and ranches between Alpine and its neighboring communities, but not the towns themselves (photos taken in or beyond Marfa, Fort Davis, Marathon, and Terlingua will not be eligible). See the Complete Photo Contest Rules for more details.

The contest is open to entries through September 30, 2017. Fill out the Photo Contest Entry Form and upload your images (or e-mail the files to uploads@visitalpinetx.com). Up to five photographs may be entered per participant. See the Complete Photo Contest Rules for more details.