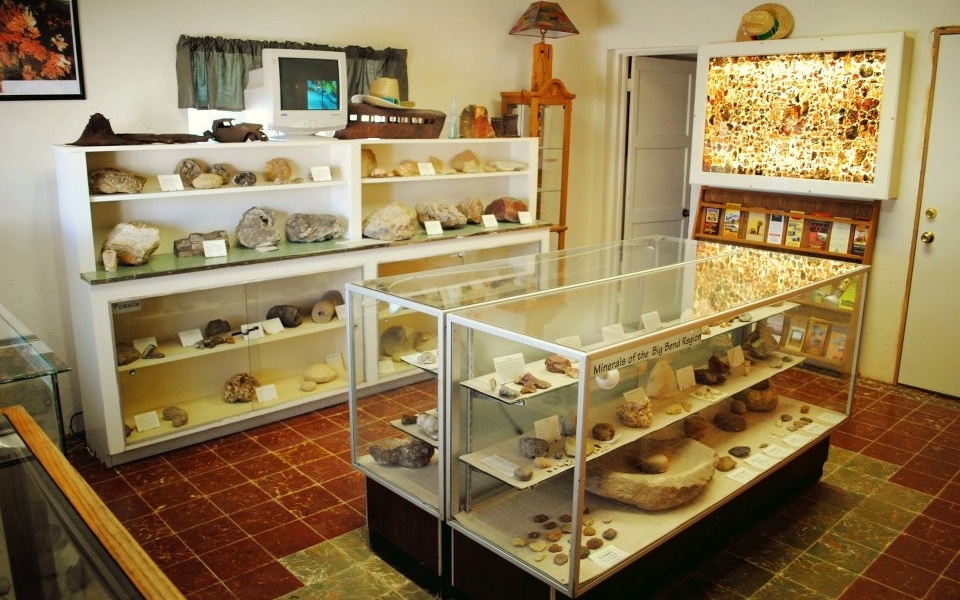 the Last Frontier Museum in Alpine

Agate is a hard, durable mineral made out of quartz (silicon dioxide). It occurs all around the world, in every color, and in many different types of patterns. It is as beautiful as it is versatile: Agate has been used in jewelry and other decorative objects throughout history.

Some of the agate patterns are recognized by name and associated with a particular location. This is the case in the Big Bend region, where Red Plume Agate, Bouquet Agate, Black Plume Agate, and Pom-Pom Agate are just a few of the varieties found.

The Big Bend Region of Texas encompasses both volcanic and sedimentary areas. In much of the Big Bend, the volcanic rock did not explode from erupting volcanos, but instead cooled below the surface of the earth. As the magma cooled, heavier elements like metals sank to the bottom of the magma, and the gasses in the magma rose to the top. Millions of these gas pockets were left unfilled when the magma cooled into basalt, allowing the gasses to escape. The agate primarily forms in these empty gas pockets through precipitation (where silica dissolved in water precipitates out and stays in the empty gas pocket, along with trace minerals that cause the colors and patterns). If there are large cracks in the volcanic basalt, agate can grow in there, as well.

The agate that forms in an empty gas pocket is stronger and more durable than the basalt in which it grew. Eventually, the basalt cracks and breaks into small pieces, eventually turning into soil. This process first exposes and then releases the agate contained within the basalt. When first exposed, the agate is usually in the shape of the gas pocket where it formed. An agate in this form is called a “nodule”. Agate nodules in the Big Bend can vary from the size of an English pea to the size of large watermelon. By the time it’s released, however, it may be broken into pieces which don’t resemble the shape of the original nodule at all.

And agate that forms in cracks or seams can be very large – the Last Frontier Museum in Alpine has a piece of “seam agate” on display that weighs approximately a ton!